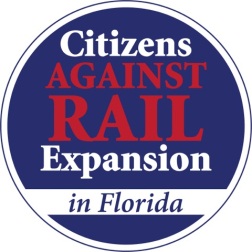 Citizens Against Rail Expansion in Florida (CARE) continues to actively pursue all appropriate legal, political and public communication channels to stop the ill-conceived All Aboard Florida (AAF)/Brightline rail project that threatens the public safety and current way of life of communities throughout the Treasure Coast.

As we previously reported, a ruling from Judge Cooper in August 2016 was an important victory in this case—a case that is focused on violations of federal environmental laws and the illegality of using private activity bonds (PABs) for AAF.  Judge Cooper denied motions to dismiss the case from the Department of Transportation (DOT) and AAF, and ruled that the Counties have standing with respect to their claim of National Environmental Policy Act (NEPA) violations.

In November 2016, before a final ruling on the lawfulness of DOT’s $1.75 billion PAB allocation to AAF, DOT and AAF filed motions that announced the withdrawal the $1.75 billion allocation that was first granted in December 2014.  In addition, it was made public that AAF has applied for—and DOT has approved—a “new” $600 million PAB allocation that will finance only Phase I of the project (the portion of the AAF project that would run from Miami to West Palm Beach).

This withdrawal of the $1.75 billion bond allocation was a very significant victory for the Counties, CARE and the entire Treasure Coast region.

Once AAF’s $1.75 billion PAB allocation had been withdrawn, DOT and AAF again sought to dismiss the case.  The Counties filed opposition motions on January 16, and DOT and AAF filed reply briefs on January 31.  The case is now fully briefed, and the Counties and CARE are awaiting Judge Cooper’s ruling.

Next Steps on PABs.  In his August 2016 ruling, Judge Cooper noted that “…PAB-based financing is not just the ‘current financing plan’ for the project—it appears to be the only financing plan.”  Therefore, the withdrawal of the original $1.75 billion PAB allocation leaves AAF with no clear path to fund Phase II (the phase that would run from West Palm Beach to Orlando, through the North Palm Beach County and Treasure Coast communities that CARE represents).

First, DOT should conduct a genuine economic analysis of the project before any such approval.  CARE strongly believes that taxpayer dollars—in the form of subsidies from the tax-exempt nature of the PABs—should not be wasted on a project that has not proved its creditworthiness or economic value.

In November 2016, DOT sent a letter to one of our champions, U.S. Representative Bill Posey (R-FL-08), in response to an AAF question he asked the agency.  In its response, DOT wrote that it “...does not evaluate ridership, revenue, or creditworthiness in determining the eligibility of projects for Private Activity Bond (PAB) allocations, and therefore did not consider the study in connection with its PAB allocation to the AAF project.”  It is clear from this sentence that DOT had no apparent standard upon which it based its decision to approve the original $1.75 billion PAB allocation to AAF, and this must change.

Second, DOT must issue a Record of Decision (ROD) on an updated version of the August 2015 Final Environmental Impact Statement (FEIS) for the AAF project.  DOT still has not issued a ROD on the August 2015 FEIS, and the lack of a ROD is a deliberate action intended to limit citizens’ right to sue under NEPA.  CARE strongly believes a ROD must be issued, so that it and other concerned parties have the opportunity to sue based on NEPA violations.

State and Federal Advocacy Efforts.  CARE has renewed and strengthened its advocacy efforts at both the federal and state levels.

SB 386 provides the Florida Department of Transportation (FDOT) with the authority to regulate railroad companies in FL, except for when authority is preempted by federal laws/regulations.  In the Florida House of Representatives, CARE champions MaryLynn Magar (R-82), Gayle Harrell (R-83) and Erin Grall (R-54) have introduced companion legislation.

CARE FL is supporting the efforts of the Martin and Indian River County government affairs teams to advance this important legislation.

The FDFC has not scheduled any action on the $600 million in “new” bonds from DOT, consistent with its actions on the now-defunct $1.75 billion PAB allocation.

Through the work of CARE’s advocacy team, we hope to learn more in the near future about FDFC’s role in this reshuffling of AAF’s capital stack, and will bring you updates as developments occur.

CARE also continues to engage federal lawmakers, including Rep. Posey and new Rep. Brian Mast (R-FL-18).  Importantly, CARE was pleased to learn that Rep. Mast was selected by House Republicans to serve on the Transportation and Infrastructure Committee, a committee that is central to our efforts.

CARE had the opportunity to meet with Rep. Mast in January, when he brought the Chairman of the Transportation and Infrastructure Committee to Florida for a tour.

Please stay tuned for additional updates on our advocacy efforts at both the state and federal levels in the coming weeks.

Public Relations Update.  During the month of January, in support of Martin and Indian River Counties, we have been working to highlight the need for state laws and/or regulations governing high speed rail safety, as Florida currently has none. As discussed above, Senator Debbie Mayfield and Representatives MaryLynn Magar, Gayle Harrell and Erin Grall recently filed legislation to create the Florida High-speed Passenger Rail Safety Act, and CARE sent out a statement in strong support of their important bills. We also ensured that media outlets in our area were aware that this legislation was filed and provided coverage (included in the ICYMI section below).

During the last month, we drafted and distributed a letter to communities throughout the Treasure Coast region to provide them with an update on CARE’s efforts and achievements and encourage their support. In addition, CARE also released a congratulatory statement to Rep. Mast on his appointment to the Transportation and Infrastructure Committee.

We also have continued to respond to media inquiries and have been able to express our views against the AAF project on several radio programs. Additionally, through an ongoing two-way conversation with several key editorial board members and columnists, we have started to see a shift in the coverage.

Our Facebook friends continue to grow.  We encourage you to like us and to engage in conversations related to our region.

In Case You Missed It

by TC Palm Editorial Board

Florida to regulate Brightline? It's worth a try

Winning this fight continues to be up to us!  CARE and the residents of the Treasure Coast have the most to lose from this project, and we hope you will continue to oppose AAF by standing with CARE.

WE NEED YOUR HELP NOW MORE THAN EVER

We would love to hear from you and if you care to make a contribution we’ve made it easy – just click here.

Please continue to share these updates with your family, neighbors and friends.   There will be additional developments to report on in the coming weeks, so please keep an eye out for our monthly updates and possible calls to action.

Thank you for your continued support.  Together We Can Make A Difference.