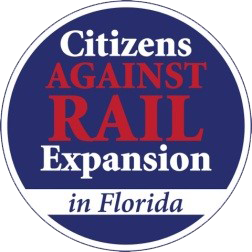 Citizens Against Rail Expansion in Florida (CARE FL) continues to actively pursue all possible legal, political and public communication channels to stop the ill-conceived All Aboard Florida (AAF)/Brightline rail project that threatens the public safety and current way of life of communities throughout the Treasure Coast.

Rail Safety.  Recent local press about completed track plans and grade crossing designs in our Counties have caused some consternation that the second phase of AAF—north of West Palm Beach, up to Cocoa, and over to Orlando—is a done deal.  This could not be farther from the truth, no matter what AAF and government agencies supporting the project would lead you to believe.

Since its inception, CARE FL has strongly believed that threats to public safety at grade crossings and along the entire AAF route are among the most troubling aspects of the project.  For months, CARE FL, the Counties and federal legislators sought to obtain a copy of an important safety letter the Federal Railroad Administration (FRA) sent to AAF in December 2015.  The letter was finally made public in April, thanks to the leadership of U.S. Congressman Bill Posey (R-FL-08).

In no uncertain terms, this FRA letter stated that the grade crossing plans submitted by AAF did not meet FRA’s minimum safety standards.  The railroad was then given a chance to take corrective action and resubmit its grade crossing plans, and the critical December 2015 letter was not made public until after AAF had taken these corrective actions and resubmitted its plans in a manner that met FRA’s minimum required standards.

But this “done deal” perception leaves out key factors, and CARE FL’s concerns remain.  For example:
•    These safety plans deal with the grade crossings, but not the areas in between the crossings, so there are still unanswered safety questions, such as whether or not certain areas along the route will be fully fenced in;
•    Will AAF pay for safety equipment installation even in areas where the trains do not reach speeds of 80 mph, but yet will still be much higher than today’s average speed of 33 mph?
•    Once safety features are installed, local communities are still left paying for the upkeep and maintenance of these features in perpetuity—an unfunded mandate for an ill-conceived project.

The bottom line is that AAF has repeatedly demonstrated it will not act to protect the safety of our communities unless forced by the FRA to do so—as evidenced by the FRA’s strongly worded letter to AAF from December 2015 and AAF’s subsequent corrective actions.  Further, there is still much more work to be done between AAF, the Counties and the FRA with respect to finalizing crossing permits.  That is the next venue for this effort.

Funding the Railroad.  Beyond the specific safety concerns highlighted above, there is no evident source of funding for AAF to build its railroad.  To date, AAF has not sold its tax-exempt Private Activity Bonds (PABs).  In addition, AAF continues to build its so-called “capital stack” of potential federal dollars it is pursuing or may pursue in order to reduce its own monetary commitment to the project, but these too are by no means a done deal.

AAF continues to pursue a Railroad Rehabilitation and Improvement Financing (RRIF) loan and is also seeking federal dollars through a local municipality for a Transportation Investment Generating Economic Recovery (TIGER) grant.  As we previously reported, these U.S. Department of Transportation (DOT) funding options would allow for much-needed repairs and improvements to the antiquated movable rail bridges along the route while also letting the railroad off the hook for paying for the necessary work.  CARE FL continues to have serious concerns with this approach.

Permitting and Rulemaking.  In coordination with the Counties, CARE FL continues to monitor the permitting and rulemaking actions of other federal and state agencies, including the U.S. Coast Guard, the U.S. Army Corps of Engineers (ACOE) and the Florida Water Management Districts, and is considering legal actions on these permitting issues at the local, state and federal levels.

To this end, CARE FL has retained Shubin & Bass, P.A.—a boutique, Florida-based law firm with deep knowledge in these permitting areas—to represent its interests with respect to evaluating the propriety of the South Florida Water Management District (SFWMD) and ACOE permitting processes for the AAF project, including any legal or administrative challenges to the permits.

Most recently, CARE FL submitted comments to the ACOE on AAF’s permit application, echoing the comments previously submitted by both Indian River and Martin Counties and maintaining that AAF’s application is incomplete and does not properly address the required criteria that must be satisfied prior to the issuance of a permit.

Under Shubin & Bass’s guidance, CARE FL will continue to work with the Counties in the coming weeks to further review all ACOE permitting issues and to monitor the permit application activity before not only the SFWMD, but also the St. Johns River Water Management District (SJRWMD).  CARE FL will be drafting additional comments and considering legal options, as appropriate.

Federal Lawsuit.  Finally, we are still awaiting a ruling later this month or in June on the federal lawsuit filed by Martin County, Indian River County and two CARE FL members that is focused on violations of federal environmental law and the illegality of the PAB approval.

Public Relations Update.  In coordination with the leaders of the CARE FL Steering Committee and MWE, H+K Strategies distributed a statement on April 20th that resulted in several media hits across the region.  The CARE FL statement was picked up by the TC papers and again in its entirety on Sunshine State News, a widely distributed online news publication that is well-read by Florida’s influencers. The statement highlighted CARE FL’s concerns with the December 2015 letter from the FRA to AAF (discussed above).  We heard from many of our members on this issue and we thank them for the positive feedback.  You, the members of CARE FL, broke that news first.

We also continued to respond to daily media inquiries, and are working with a new investigative reporter with the TC Palm on a piece about rail safety.  You will also be happy to hear that under the leadership of Committee Member Jane Feinstein, we are close to pushing out a candidate survey to more than 150 candidates including those vying for federal, state and local seats.

Finally, please look forward to guest columns from John Payson, Jupiter Island resident, who has kindly volunteered to offer his perspective on AAF and its efforts.

Again, winning this fight is up to us. The residents of the Treasure Coast communities who have the most to lose from this project must continue to take a stand and fight—and CARE FL is ready to continue leading the way.
To get the latest news visit our website www.saveourfl.com or like our Facebook page for updates on CARE FL’s progress.  The Facebook page has generated a strong following – so thanks to each and every member for these efforts.   Special thanks to our supporters for the many donations we received through our new PayPal option on our website.   Just visit our site http://www.saveourfl.com/donate.html for more information on this feature.

After 2 years CARE FL is at the forefront of this fight.  We continue to bring on new supporters and communities from as far north as Orlando to as far south as Miami.  If you would like CARE FL to come out and speak with your homeowners in your community; you can contact us at careflinfo@gmail.com.

Please continue to share our updates with your family, neighbors and friends.   There will be some very interesting developments we will report on in the near future.  So keep looking for our updates or call to action.

Thank you for your continued support.  Together We Can Make A Difference.
Brent P. Hanlon
Chairman, CARE FL